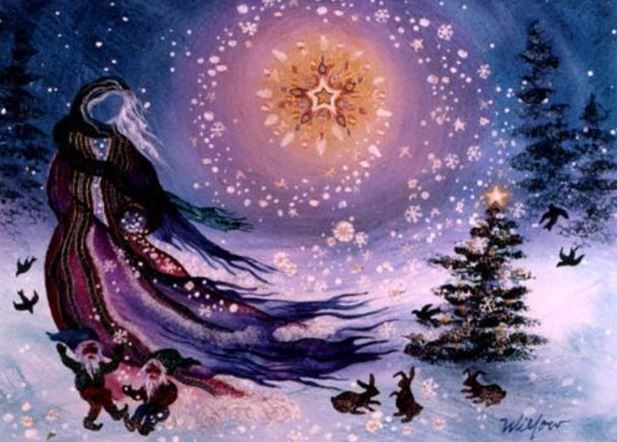 The darkest night makes it’s final stand before yielding to the returning light.  Winter Solstice is celebrated as Yule, Germanic “Jul” means wheel, time moving through the cycles of nature.  For my ancestors this would have been a time when the life around them seemed more dead than alive and the darkness long and cold.  Would the sun return to bring life back to the Earth?  They would have been in awe and grateful for any signs that life would remind them of warmer days and the abundance of growth.  Evergreens would serve as that reminder, that even in darkness and death, life continues.  They would bring evergreens into their homes and give them as gifts of prosperity and faith that the light would return. The light and warmth from the fire would be crucial to survival and so they would light the yule log on this dark night.  Also known as Mother’s Night, the archetypal mother gives birth to the sun (son).  That faith in the returning sun would lead to the belief in magic, especially at a time when it would be needed most.  A time of wishing and hoping for goodwill toward others in the harshest time of the year.

Today it is hard to even imagine what that must have been like to connect so deeply with nature and the cycles of the season.  However, I believe that it is in my bones and blood, passed down through my ancient mothers and fathers.  As I try to remember and connect to that deep knowing inside of me, I celebrate Yule with offerings and ritual.

On the morning of solstice rise with the sun

If you can, place yourself under her direct light or where you start to see the glimpse of her coming over the horizon

See the life beneath the Earth waiting to make its return

See that life resting peacefully now, taking time to store her nutrients, to consider how she will spring to life one day, to reach up to the sun, to feel the wind through her leaves, to feel the rain on her flower, to be bathed under the stars and the moonlight.  She knows that inside her she holds all the potential to become all that she is meant to be.  But now it’s time to rest in the fertile darkness, she knows that stillness is just as important as the growing, the reaching and the blooming.  It will all happen when the timing is right, for it is meant to be.  She is not the one that creates the flower, she doesn’t have to, it’s already inside of her just waiting to show the world exactly how she is was meant to blossom.

With gratitude for the returning light that will stir the life within.  Focus on your own internal light and see it growing brighter in this time of the light returning to the earth.  We will burst forth into expression as the light grows in strength after this portal of winter solstice.

Take a deep breath and know that you carry inside of you the divine light that will never be distinguished and may we remember that light as we see the sun shine and it reflected back to us through the light in others.

With gratitude and prayer, So it is!!

TWAS’ THE NIGHT BEFORE YULETIDE

Twas the night before Yuletide and all through the glen
Not a creature was stirring, not a fox, not a hen.
A mantle of snow shone brightly that night
As it lay on the ground, reflecting moonlight.

The faeries were nestled all snug in their trees,
Unmindful of flurries and a chilly north breeze.
The elves and the gnomes were down in their burrows,
Sleeping like babes in their soft earthen furrows.

When low! the earth moved with a thunderous quake,
Causing chairs to fall over and dishes to break.
The Little Folk scrambled to get on their feet
Then raced to the river where they usually meet.

“What happened?” they wondered, they questioned, they probed,
As they shivered in night clothes, some bare-armed, some robed.
“What caused the earth’s shudder? What caused her to shiver?”
They all spoke at once as they stood by the river.

Then what to their wondering eyes should appear
But a shining gold light in the shape of a sphere.
It blinked and it twinkled, it winked like an eye,
Then it flew straight up and was lost in the sky.

Before they could murmur, before they could bustle,
There emerged from the crowd, with a swish and a rustle,
A stately old crone with her hand on a cane,
Resplendent in green with a flowing white mane.

As she passed by them the old crone’s perfume,
Smelling of meadows and flowers abloom,
Made each of the fey folk think of the spring
When the earth wakes from slumber and the birds start to sing.

“My name is Gaia,” the old crone proclaimed
in a voice that at once was both wild and tamed,
“I’ve come to remind you, for you seem to forget,
that Yule is the time of re-birth, and yet…”
“I see no hearth fires, hear no music, no bells,
The air isn’t filled with fragrant smells
Of baking and roasting, and simmering stews,
Of cider that’s mulled or other hot brews.”

“There aren’t any children at play in the snow,
Or houses lit up by candles’ glow.
Have you forgotten, my children, the fun
Of celebrating the rebirth of the sun?”

She looked at the fey folk, her eyes going round,
As they shuffled their feet and stared at the ground.
Then she smiled the smile that brings light to the day,
“Come, my children,” she said, “Let’s play.”

They gathered the mistletoe, gathered the holly,
Threw off the drab and drew on the jolly.
They lit a big bonfire, and they danced and they sang.
They brought out the bells and clapped when they rang.

They strung lights on the trees, and bows, oh so merry,
In colors of cranberry, bayberry, cherry.
They built giant snowmen and adorned them with hats,
Then surrounded them with snow birds, and snow cats and bats.

Then just before dawn, at the end of their fest,
Before they went homeward to seek out their rest,
The fey folk they gathered ‘round their favorite oak tree
And welcomed the sun ‘neath the tree’s finery.

They were just reaching home when suddenly it came,
The gold light returned like an arrow-shot flame.
It lit on the tree top where they could see from afar
The golden-like sphere turned into a star.

One Reply to “Yuletide Greetings”